How an Inman deli improves its successful recipe

Yes, Delightful Dishes had been opened over a decade by 2009. Indeed, we confess that we hadn’t had to change our successful recipes much as written by the press at that time. In fact, we believe Dudley Brown, the author of the article referenced here, was making a positive and profound point: Our time-tested, proven recipes catering to loyal customers had become local classics. Why tamper with a successful recipe?

Dudley was definitely spot on about one thing: We’re very aware and grateful for our customer’s confidence in us. They can always count on us for a consistent, traditional and delightful meal.

“some of our recipes have remained the same over time, with a few minor tweaks. Other recipes came from our mothers and grandmothers.” –Medlock and Morrow

However, we can’t take all the credit. We’ve always remained quick to confirm that many of our hot specials are still like grandma used to make.

Reviewing the 2009 article by Dudley Brown got us both to thinking a bit about what makes a successful recipe though. After all, a recipe isn’t always in reference to food, right? Sure, we’d prefer a recipe lead to something yummy in our tummies. On the other hand, the definition of a “recipe” could also be perceived as any instructions that lead to an expected outcome if properly followed. By this definition, one way our modest Inman eatery quietly improves its successful recipe is by continuously adding convenience to the process of ordering and delivering delightful dishes.

A proven recipe for a fulfilling lunch break

Naturally, we started getting all extra philosophical on the matter before we dropped the pretense and started making fun of each other. We weren’t laughing because a deep dive discourse between two business women is a ridiculous notion. On the contrary, it was because two friends laughing at each other is a proven recipe for a fulfilling lunch break, especially after wrapping up another Wednesday lunch rush while customers continued exchanging well wishes.

So, back to the article and back on topic: Mr. Dudley Brown was a straight shooter and included all the usual suspects in his breakdown of The Dish line up back in 2009.

First up, He noted that Delightful Dishes serves a variety of sandwiches and salads and offers a daily special such as meatloaf or country-style steak. Indeed we did and indeed we still love doing so.

How you mix your prepared salads is your choice. We don’t judge at The Dish.

Next, Mr. Brown informed readers that our restaurant makes sides you can buy by the pint, including chicken, tuna and egg salads. Right on, only we like to refer to our prepared salads like our customers often do: Main courses when properly combined together in two, three or even four different scoops.

“I really like their salad plates [and] the strawberry congealed salad. It’s a healthy dessert.” Brandi Almond who regularly eats at Delightful Dishes said. Her favorite is the chicken salad.

If this sounds like it could get complex, no need to worry, we don’t judge at The Dish. How you mix your prepared salads could be based purely on taste or perhaps complimentary color arrangements for Instagram notoriety. Keep your aesthetics to yourself or show us what ya got on your social media of choice.

Back in 2009 people hadn’t started building grass roots online menus with hashtags like #DDMenu or #InmanDish or… We should probably let this go, right? Moving on.

Wait, are we still dancing around social media, change or both?

This off-topic social media chatter does actually bring us back to the central topic of change again as referenced in the 2009 article’s title. The article mentioned the lack of change at our Inman eatery in particular. The subject of change often reminds me of our Chapman High School English Literature teacher, Boggs I believe, as well as poets and musicians that muse over whether we change or the world changes. For example, consider the following Delightful Dishes’ quote:

“We’re tempted to try new things, but we have a lot of people who’ve been with us for a while. Regulars are often vocal when something is changed. Consistency has been important.” –Ginger Morrow

These days regulars can be very vocal very quickly on multiple social channels, and it’s our responsibility to make sure we pay attention. Technology changes have blind sided many restaurants. Let’s be frank, tech has literally steamrolled us faster than an over worked husband in the middle of a monster truck nightmare. It’s enough to crush ya if you’re not agile enough to pivot quickly. Still, keeping sight of our number one priority remains a successful recipe: Serving customers awesome food!

Customer’s favorite past time at The Dish remains the same: Eating the best chicken salad ever

So here we are. Another 10 years later and I can say for certain the world has and continues changing. The young ones are aging into consumers with expectations of digital convenience and far be it from us to ignore them. Listen, I hear ya, try to take away my streaming Spotify and we’re gonna have words. So let’s all make nice, swap play lists and agree about one thing that has NOT changed. Customer’s favorite past time at The Dish remains the same: Eating the best chicken salad ever in the heart of the U.S. …Yep, that would be Inman, SC in our humble opinion!

Oh yes we did. We said it. I suppose we actually have changed a bit too. We’ll always serve customers with genuine humility, respecting the tradition of the two founding housewives that started Delightful Dishes. But we also think you should be a bit concerned if a restaurant isn’t convinced they serve the absolute best. So, #BestChickenSalad it is! Alright, that was the last one, promise-ISH.

Well, I suppose we should wrap up this 2009 article recap with a word about Fridays because something about Fridays just seems so full of promise, no?

Our original author, Brown, wrote that, “some of [our] restaurant’s most popular specials are served on Fridays, which is frequently Delightful Dishes’ Italian day. Friday’s special is either lasagna or baked spaghetti.”

Now, hold up before everyone comes banging down the door this Friday. Before we can flip the lunch light on super bright – it’s actually not really a fancy light, just a basic sign that we flip over – we should put you at ease. Keep in mind that many of our casseroles can also be bought frozen to be heated at home. So, if you can’t make it for lunch between 11 AM. and 2 PM, you can still order online and schedule your pickup for weekdays between 11 AM and 4 PM.

And yes, this does include what Morrow described.

Put another way, she’s describing authentic Inman lasagna created with care and proper background music. That means it rocks! And we’re not just saying that to sound saucy. Wait, see what we did there? 😉

Now, some of you might be thinking the following:

“But what if I can’t make it to Delightful Dishes on a weekday by 4 PM and I really need to stock up on casseroles and chicken salad too?”

You should probably sit down before we tell ya this next mind blowing service we’ve added. It’s called Weekly Dish Delivery. You can learn all about it on our Dish Delivery page, but the bottom line is simple. If you order casseroles, prepared salads, desserts and strawberry tea online by 4:30 PM on Wednesday, we bring the goods directly to your door on Thursday afternoon. Hold up, that’s big news right? Some might even call it big change. 🤔

Medlock, a retired teacher, said getting to know the longtime regulars and other customers is fun wrote Brown.

“I’ve enjoyed meeting different people, and I’ve gotten to know a lot of people by their first name, and they call me by my first name,” –Medlock said.

Indeed the community we’re surrounded by remains our cornerstone, and a large part of that community consists of dedicated teachers like Medlock was. 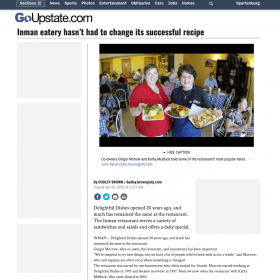 Inman eatery hasn’t had to change its successful recipe

The article referenced in this post was written and posted on GoUpstate.com on April 30, 2009. To read the referenced article written by Dudley Brown in its entirety, Click here.