My grandmother’s chicken noodle soup, at what I assume had at one point been my father’s request, was what we ate during each of those family dinners.

His thick craggy fingers wrapped themselves in a fist around the handle of his spoon, the head of which poked out just north of his knobby thumb. Those hands were most familiar with that position, spending an inhuman number of hours each week gripping the steering wheel of his big rig in much the same way. Those southern hands were not as comfortable with the northern weather into which he ventured every trip, and their dry, cracked skin hinted at the discomfort they caused him. Only the nicotine-stained calluses between his first and middle fingers were able to remain intact during the coldest months.

His dedicated run between Charleston, and Buffalo, New York, kept him away from our rural South Carolina home more often than not. The route was always the same, but the scheduling of the loads was not. Although, it was not lost on me that the bulk of his downtime seemed to occur while he was away in Buffalo rather than at home, I wasn’t always sure how much I minded. The glare of the rig’s headlights from the end of the driveway and the crunch of its heavy tires over the gravel signaled both the security and the insecurity that his presence brought to our daily lives.

His dedicated run between Charleston, and Buffalo, New York, kept him away from our rural South Carolina home more often than not.

His reluctance to speak in more than monosyllabic, disapproving grunts and his gruff, distant demeanor only ever softened slightly, and only in his mother’s presence. His personal schedule at home between trips was formulaic, and it always revolved around a dinner visit to his childhood home and a few solemn beers during happy hour at a roadside bar called “Ed’s”. During those family dinners, his answers to his mother’s litany of questions were respectful and attentive, even if his tone was still quiet and unemotional. 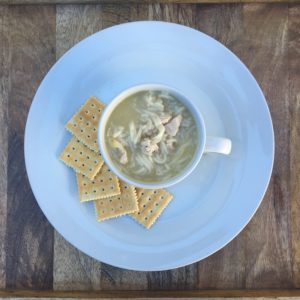 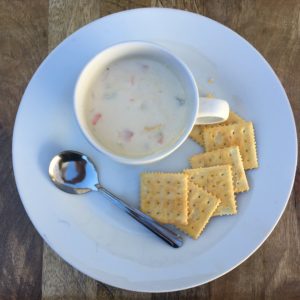 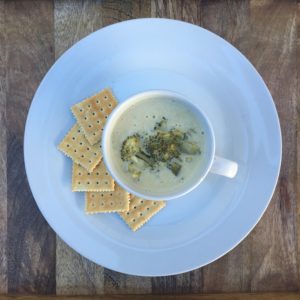 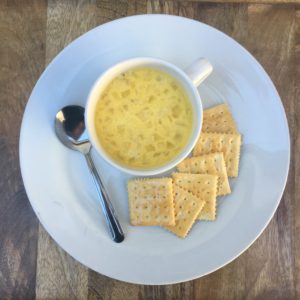 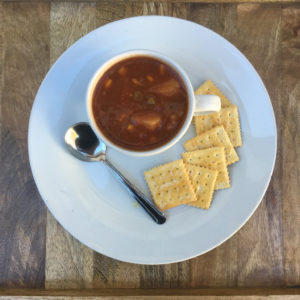 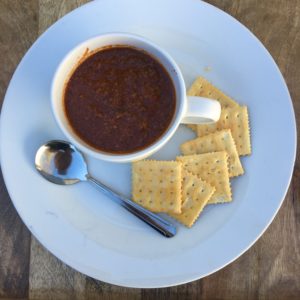 At what I assume had at one point been my father’s request, we ate the same thing during each of those family dinners – my grandmother’s chicken noodle soup. I remember thinking that the large pot in which she prepared it seemed impossibly ancient, and I was never sure how she managed to transport it between the cupboard, the stove, and the sink. After the meal, we’d be chased from the kitchen out into the yard, and not called back inside until it was time to go home. Lining up to take our turns hugging and saying goodbye to my grandmother, my sister and I would be handed the containers of chicken noodle soup that would hold my father over until his next visit.

My sister and I would be handed the containers of chicken noodle soup that would hold my father over until his next visit.

I don’t know if I ever heard him mention that soup by name, but he never climbed into that rig without his old dented thermos full, and it was always our first meal on the day he returned home. His spoon clutched in his fist, he’d slurp the drips of broth off his lower lip just slightly, and grunt quietly with satisfaction after every few bites. It was the only dish I remember my mother serving at home that had not been made by her own hands, and I always imagined she was happy for the break.

It gave me comfort to know that he had that thermos with him while he was gone, as if it kept him tethered to our family back home. Buffalo seemed so far away and so foreign to me back then. He might as well be sailing to the edge of civilization or landing on the moon. In a way, when he was gone, it almost felt like he temporarily stopped existing at all. Despite the stories I heard about the harsh weather and exhausting hours he faced out on the road, I never worried about him because danger seemed to be something too real to be an element of his vague travels.

It gave me comfort to know that he had that thermos with him while he was gone, as if it kept him tethered to our family back home.

I was completely taken off-guard then when my mother told us that he’d been involved in a serious accident just outside of Pittsburgh, Pennsylvania. In the middle of the night, we borrowed some warmer clothing from family friends down the road before she packed us for our trip. The idea of traveling to visit my father in the hospital seemed surreal, but my mother did an admirable job of masking her panic with a fixed determination. I remember listing in my mind the number of times I knew of that our family car had been more than a few miles outside of our small sleepy town, and I couldn’t remember my mother driving during any of them.

I don’t recall much about the drive other than that it was long and that the inky blackness outside the car’s windows seemed to go on forever. It struck me for perhaps the first time how much time my father spent out in this darkness with nothing but the dashboard lights and the CB radio to keep him from being swallowed up entirely. I wondered if it felt strange to him when he finally had occasion to come in from it.

It struck me for perhaps the first time how much time my father spent out in this darkness with nothing but the dashboard lights.

He seemed smaller in his hospital bed. The nurses’ shoes squeaked in the hallway outside his room, and I kept looking toward the door to see if anyone was coming in. He spoke mostly to my mother about the things he needed her to take care of with his company to ensure that proper arrangements were made both for the hospital and for the load. He didn’t speak directly to either my sister or me, but simply looked from one of us to the other with an expression of weariness, embarrassment, and defeat.

When it was time for us to leave, I waited until we were nearly out the hospital doors before I informed my mother that I needed to use the restroom. She instructed me to be quick and reminded me that it was getting late and that she wanted to get to the hotel to check in. I shuffled quickly down the hallway until I could home in on the squeaking of the nearest nurse’s shoes. “Can you help me?” I asked her quietly. “I need to get this to my dad,” I said, as I opened up my coat.

My father’s eyes were closed when she showed me back into his room, but he opened them and looked over at me when I timidly called to him. Taking an old, battered thermos from my coat, I opened it up and poured him a piping capful of my grandmother’s chicken noodle soup. “The nurse helped me warm it up,” I explained, “She said it was okay for you to have some.”

Taking an old, battered thermos from my coat, I opened it up and poured him a piping capful of my grandmother’s chicken noodle soup.

One corner of his mouth turned upward in a lopsided smirk I’d previously only seen him use rarely with my mother and slightly more often with our neighbor, Frank. “Where’d you get that thermos?” he asked.

“It’s an old one that Tommy Whitehurst got from his father,” I answered, unsure whether or not he’d approve. “I traded him some of my baseball cards for it.”

“I see…,” he said, drawing out the second word. He sat there, in silence for a moment, blew on his capful of soup, and then took a long, slow sip. “I’ll be home soon,” he finally said, “Now that we’ve each got one, I suppose we ought to fill them up and take them fishing with us.”